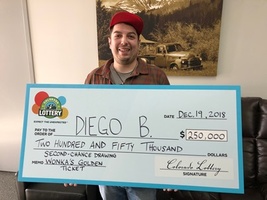 What better time to win a quarter-million-dollar prize than right before the holidays? There is no time like the present for one Denver man.

Diego B. won $250,000 in a Second-Chance Drawing for the Scratch game Wonka’s Golden Ticket. The Lottery’s Prize Surprise crew caught up with him at work and presented him with a big check. In complete shock, Diego fell to his knees crying, disbelieving what was happening.

He said he moved here four years ago from Iowa, where a failed relationship and other struggles eventually left him homeless and living in his car for 11 months. Diego said he befriended his current boss, Cory, in a Mitsubishi aficionado group on Facebook. Cory told him if he moved to Denver he would give Diego a job and help him get back on his feet.

“I keep thinking I don’t deserve this,” Diego said, with tears in his eyes. “I’m going to make a lot of people happy with this money.”

Diego has a 6 year-old son in Iowa whom he plans to spoil with Christmas gifts. He also has plans for some land he owns near Alamosa and hopes to break ground there very soon.

The odds of winning the Second-Chance prize on the Wonka’s Golden Ticket were 1 in 174,200. For more information on upcoming Second-Chance Drawings, please visit https://www.coloradolottery.com/en/games/scratch/drawings/. Players can submit non-winning Scratch tickets through the Lottery’s website and mobile app.