Powerball and Mega Millions Jackpots Are Close to $1 Billion 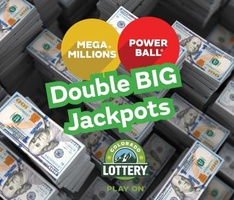 As the Mega Millions and Powerball jackpots near a combined $1 billion, tonight and tomorrow could change lives.

The estimated jackpot for tonight's Mega Millions drawing is $520 million. If won, it would be the 8th largest jackpot in the game’s history. The estimated cash value is $383.4 million.

The Jan. 9 Powerball jackpot is an estimated $470 million ($362.7 million cash). At $980 million, this is the highest combined jackpot total for Mega Millions and Powerball since October 2018, when the Mega Millions jackpot reached its all-time record of $1.537 billion. This is only the third time in history that both games have simultaneously had jackpots larger than $400 million. The last Mega Millions drawing on Jan. 5 produced 1,927,049 winning tickets.

If Powerball is won Saturday, it would be the 10th largest jackpot in Powerball game history. This is the highest the Powerball jackpot has been since March 2019 when a $768.4 million jackpot was won in Wisconsin. Colorado had a $50,000 winner in the last Powerball drawing, sold at Stinker Store on S. Havana in Aurora on Jan. 6.

Lottery beneficiaries and retailers win big when jackpots rise at this level. Of every jackpot ticket sold, 39% of it goes to Lottery beneficiaries that fund the outdoors and schools. The nearly 3,000 Lottery retailers make 6% selling commission on every ticket they sell and 1% commission on winning tickets. If a Colorado resident won the jackpot, the retailer who sells the ticket will receive a $50,000 bonus.