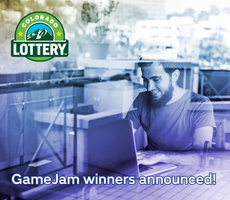 The Colorado Lottery is proud to announce the winners of the Lottery's first GameJam hackathon! More than 200 people participated in the contest.

The Lottery and its hackathon partners -- ETHDenver, IGT, and Chainlink -- have chosen the winners of the Lottery’s first GameJam to develop new games. The winners were announced at the hackathon’s virtual closing ceremonies just moments ago. Participants of the GameJam were asked to create a new game of chance in a 10 day period. The developers of the top three games win a top prize of $10,000, second prize of $5,000 and a third prize of $2,500. An additional prize pool of $8,500 was awarded by Chainlink for games that met both the original guidelines and were completed using Web3.

More than 200 people registered to participate in the GameJam competition to create a new game for the Lottery. A total of 30 projects were submitted for the GameJam. Nearly 50% of the U.S. participants were from Colorado; there were participants from a total of 19 countries.

Frontier Airlines joined as a sponsor to help spur creativity by giving 20 flight vouchers valued at $250 each as additional prizes.

The Colorado Lottery GameJam winning designs were awarded as follows:

The Chainlink winnings designs which utilized Web3 technology as part of their game design were awarded as follows:

The Lottery has a goal to reach $1 billion revenue in revenue by 2023 to fund outdoor recreation, land conservation and schools in Colorado, along with its commitment to responsible gaming. The Colorado Lottery GameJam served as an excellent way for the Lottery to reimagine its game offerings to appeal to more adult Coloradans of diverse ages and backgrounds.