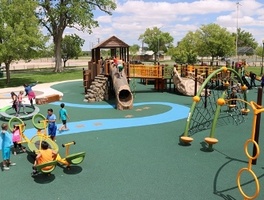 The Lottery will give the City of Greeley a Starburst Award this month.

A new all-inclusive playground in Greeley was designed for kids of all ages and all abilities.

The City of Greeley will receive a Lottery Starburst Award for utilizing Lottery proceeds to create the Aven’s Village playground within Island Grove Regional Park. The playground project, completed in December 2016, was made possible with a Lottery-funded grant of $327,250 from Great Outdoors Colorado (GOCO).

The award will be presented at Aven’s Village playground on Monday, July 31 at 2:30 pm.

Aven’s Village was created for children of all abilities to play, learn, interact, and have fun. The park is named after 8 year-old Aven Mondy, who has Cerebral Palsy and wanted a place where she could play outside with her brother. The playground includes multiple slides, a Sway Fun swing, a play panel, and a sand pit; all of which are ADA and wheelchair accessible. The play area offers a mix of sensory, social, and physical activities that allows children of various needs and abilities to play alongside each other.