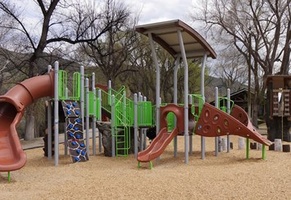 A Lottery Starburst Award was given to the City of Salida on July 27.

Kids and families in Salida can #PlayOn for years to come.

The City of Salida received a Lottery Starburst Award for using Lottery proceeds to refurbish and replace a handful of city playgrounds. Grants from two Lottery beneficiaries made the three-year project possible; a $140,000 from Great Outdoors Colorado (GOCO) and $260,000 from the Conservation Trust Fund.

The award was presented at the aptly-named Riverside Park, just steps away from the Arkansas River, and a part of the Salida Playground Master Plan and Replacement Program.

The program, which transformed five Salida parks in just three years, led to the replacement of playgrounds in Centennial Park and Chisholm Park in 2014, followed by Marvin Park, Riverside Park, and Alpine Park. The playgrounds - which were inspired by design ideas from local 4th graders - are now safe, ADA-accessible, and feature functional art pieces. The improved parks’ positive impact on the community was instant. Chisholm Park, which previously experienced heavy vandalism and graffiti, was affected most dramatically with park rental requests jumping from zero to 35 in just one year.