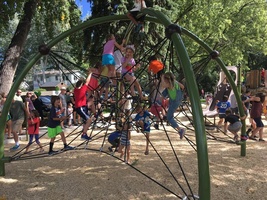 DENVER – Even though the town of Niwot contains a large proportion of children under the age of 18, there was never a park they could call their own. Thanks to the vision and donation by two local residents Niwot kids now have a place to play.

Boulder County Parks and Open Space will receive a Colorado Lottery Starburst Award for using Lottery proceeds to build the Niwot Children’s Park, which was made possible thanks to a $140,000 Lottery-funded grant from Great Outdoors Colorado (GOCO) and $10,000 from the Conservation Trust Fund, a beneficiary of the Lottery.

The award will be presented at 4 p.m. on August 9 at the park and lead into Niwot’s weekly Rock & Rails concert series held across the street at Whistle Stop Park.

This children’s-only park has been a benefit for the community of Niwot. This state-of-the-art play area helps educate the children on cultural history, while giving them a place for theatre performances and storybook readings. The park features natural landscaping, several play structures, a large woolly mammoth and fossils representing Colorado’s cultural history. Lottery funds were used to jumpstart the project by assisting with the initial purchase of the land where the park sits.

The Colorado Lottery Starburst Awards recognize excellence in the use of Lottery proceeds in outdoor recreation and conservation that enhance a community’s environment.

In FY2017 alone, the Lottery distributed $133.4 million in proceeds. Since its creation 35 years ago, the Lottery has returned more than $3.1 billion back into the state of Colorado. Lottery proceeds are distributed to three primary beneficiaries: GOCO, Conservation Trust Fund, and Colorado Parks and Wildlife. These organizations provide grants and direct funding for parks, recreation, open space acquisition, trails, and wildlife and conservation education. For more information on Starburst Awards, visit ColoradoLottery.com